Today is a sad day across TB12 Nation.

There are some moments in a person’s life that you just remember where you were, what you were doing, when big moments happen.  Me, well I was standing in the omelet line at Court of Two Sisters Jazz Brunch in New Orleans when I got the alert on my phone that the G.O.A.T. was retiring early Saturday afternoon😊.  Talk about losing your appetite…smh.  I immediately thought to myself that this couldn’t possibly be true. There’s no way that this guy, albeit at the age of 44, who had one of the best seasons of his incredible career was going to hang up the cleats.  Tom – coming off a season where he led the Tampa Bay Buccaneers to a Super Bowl victory in a new organization – took the Bucs into the Divisional Round this season, rallied them back from a 27-3 second half deficit against the Rams and had it not been for a defensive ‘fumble’, was headed to the NFC Championship game and who knows…maybe been headed to a back-to-back Super Bowl.  How can you call it quits Tommy???  It just didn’t make sense.

The weekend carried on and not a word from the man himself.  Tom’s father even told a San Franciso media outlet that his son was NOT retiring, saying that the report was an ‘unsubstantiated rumor’.  Even last night, after listening to Tom’s Let’s Go podcast, there was hope!  Tom finally spoke, and said he was still decompressing and ‘still going through the process’ of making that decision.

Well, I went to sleep last night, woke up this morning, went through my morning routine, came to work and then the official word came (delivered to me joyfully by my boss, a Brady hating Dolphins fan😊).  Tom took to Instagram, where he often does to share big news, confirming that he in fact has decided that his football career is over. Tom said that ‘football is an “all-in” proposition – if a 100% competitive commitment isn’t there, you won’t succeed’….and ‘I am not going to make that competitive commitment anymore’. Ugggggh, what a dagger to my heart!

Tom Brady also said in his football farewell that ‘There are no shortcuts to success on the field or in life’.  That statement reminded me of why I became a fan of TB12 early in his career. Yea, it’s easy to become a fan of athletes that are naturally gifted.  Tom was far from that.  Tom was a true representation of hard work and dedication to a passion.  He wasn’t a #1 draft pick, or even a first-round pick, he was drafted as the 199th selection of the 2000 NFL draft (a 6th round pick!). I mean, there wasn’t much promising or a given at that point.  But Tom was undeterred and determined – even tell Patriots owner, Robert Kraft ‘You’ll never regret picking me.’  He went to work from there, had an opportunity in the 2001 season after Drew Bledsoe was injured and the rest…well, was as history (literally).  No shortcut…just his determination, hard work, passion, and an opportunity.  He earned every yard, every championship, and every record

Love him or hate him…you can’t hate his story.  You cannot look Tom’s passion, dedication, work-ethic, attention to detail, and leadership that spanned across 22 years.  Tom Brady and his story transcends the sport of football and all of sports.

I guess I, along with millions of fans were being selfish.  Heck, I named my only son Brady.  My selfishness wanted him to play ‘until he sucked’, as Tom once said. I wanted to see a hero to me, who worked so hard to be great as his craft continue to defy the odds, beat the next generation, and continue to be a success…year after year (#GOAT). I guess my selfishness completely overlooked the fact that one of my heroes had a life outside of football – a wife, children, parents, sisters, that have made the ultimate of sacrifices  year after year (some, their entire lives) of having a part-time Tom, a part-time Dad.  Now is their time…

I read a tweet on Saturday after the story broke about his supposed retirement that said ‘Don’t be sad it is over, be glad it happened.’

Tom, thank you for giving it your all.  Thank you for being such a great example to several generations.  Cheers on a storybook career!  #GOAT 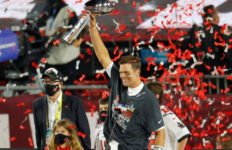 What’s Next For Tom Brady To Conquer… Crypto?→