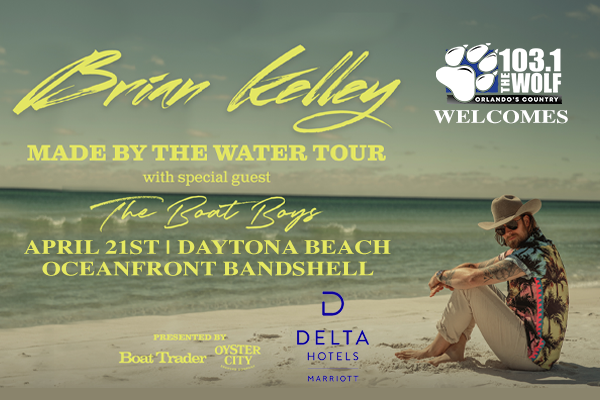 Brian Kelley at the Bandshell

Country music superstar Brian Kelley from the award-winning Florida Georgia Line, will perform at 7:30 p.m. Thursday, April 21, at the oceanfront Daytona Beach Bandshell as part of the LIVE! At the Bandshell Series.

Tickets can be purchased online at www.ticketmaster.com or between the hours of 10 a.m. and 5 p.m. Monday through Friday at the Peabody Box Office located at 600 Auditorium Blvd. Seated ticket prices are $94, $75 and $54, and general admission (no seat included) is $19 plus applicable fees and $29 on the day of the show.

Teamed with Florida Georgia Line partner Tyler Hubbard, Kelley has led a surge in country music’s evolution since 2012, mixing undeniable hooks and edgy vocal harmony with beat-driven hip-hop, pop and rock influence – plus a party-starting spirit. Together they’ve amassed 18 number one singles, and more than 13.2 billion global streams, and they have sold more than 40 million tracks and 4.7 million albums worldwide. They are the only country music act to achieve two diamond-certified singles in the genre’s history, opening new possibilities with each project. And now, Kelley’s bringing that mindset to his own songs, blazing a path through the coastal dunes of his childhood.

Making his solo debut on Warner Music Nashville / Nashville South Records, Inc., Kelley has emerged as a chill-country champion – and he’s done it with a clear vision of his truth. His first Extended Play (EP) takes listeners into the deep end of an artist who was born to make waves, right from the start. BK’s Wave Pack is the first, salt-kissed taste of this new chapter – four songs co-written as sandy singalongs with a swell of nostalgic romance. Steeped in all-good energy and beachside soul, it was co-produced with Corey Crowder as Kelley spent 2020 reconnecting to his Florida roots, a rare quiet time that was ultimately hit by a creative storm.

A native of Ormond Beach, Florida, Kelley’s childhood revolved around the water’s edge. It’s always been the place where his soul is most at peace, and even after his career took off, he’s never forgotten. BK’s Wave Pack is the musical side of that personal reclamation, and it’s all happening with typical Kelley flair. It’s not the end of Florida Georgia Line by any means, but with sandy-acoustic hooks, island-hopping beats and message-driven positivity, it’s not the last we’ll hear from the Beach Cowboy either.

The Live! At the Bandshell Series features nationally known musicians and comedians performing to hundreds of socially distanced fans at the Daytona Beach Oceanfront Bandshell. For more information, visit www.LiveAtTheBandshellDB.com or www.DaytonaBandshell.com.