I have to say, I hated falling asleep with the TV on, until I met my husband Michael and it was HIS habit I had to get used to.

In a new study done in Austria, according to the Journal of Neuroscience,  they suggest that “Going to bed with the TV on might be messing with your sleep, because our brains are constantly scanning for unfamiliar sounds and voices.  It could cause “micro-arousals” all night, where you ALMOST wake up.  They think it’s our brain’s way of letting us know there might be a potential threat nearby.”

That’s a bit confusing. When I put someone on at night, it’s something i’ve already watched and don’t care if I miss… but I don’t normally put on a new movie or a show that i’ve been anticipating. So I’m already listening to familiar voices, so to speak.

They go on by saying “Hearing unfamiliar voices when asleep caused the human brain to ‘tune in’ during non-rapid eye movement sleep (NREM), the first stage of sleep. Even though our eyes are shut off from what’s around us, the brain continues to monitor the environment as we sleep, balancing the need to protect sleep with the need to wake up.”

There you have it. The reason why I’m always tired. I might need to set a tv timer now. 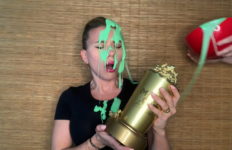